A relative newcomer to the local music scene, the Elora Acoustic Café had its debut on March 5, 2010.  The Elora Centre for the Arts provides a lovely locale with art on the walls, candlelight and a grand piano.  The Centre was once a public school which was saved from demolition (after a modern, larger Elora Public School was built) by a group of local citizens with a vision.  The historic building is now home to dance and photography studios, a youth arts group, regular gallery installations, and many community events, including the Elora Acoustic Café.

Musicians sign up as they arrive and the host, Steve Royall, calls people up to the mic for 2-3 songs.  Part way through the evening there is a half hour feature set by an invited musician and then the open mic continues afterwards.   The feature sets so far have included: Steve Royall & friends, Rich Burnett, and Errol Blackwood.  This week (June 4th)  Peter Mandic was the guest performer. 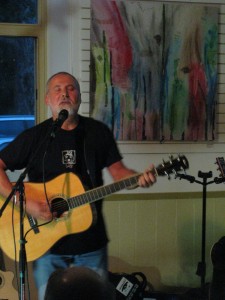 The atmosphere is welcoming and relaxed and the audience is attentive and appreciative.  The first night had such a good turnout organizers had to move some furniture out to make more room for chairs.  In addition to solo performers listeners are often treated to musical collaborations, both planned and spontaneous.  A $5 cover goes to cover costs and includes a tea or coffee. 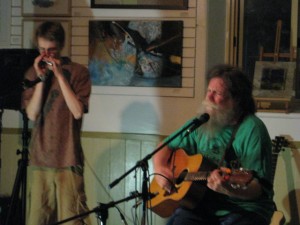 (See the Gallery for more photos)