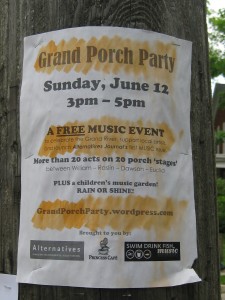 What a great way to foster a sense of community and bring music into the streets! The Grand Porch Party recruited more than 20 acts to play on porches over several blocks of uptown Waterloo.

The rain stayed away so listeners could comfortably stroll from one porch performance to another, the strains of one musician often just fading as sounds of another came into range. There were places for children to experiment with making music and homemade instruments. Volunteers staffed information tables for people to learn more about the Grand River watershed and the host organization of the whole event, Alternatives Journal. The Swim Drink Fish music club was also promoting a music approach to environmental awareness and networking. 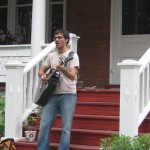 In addition to the musical guests who were booked to perform there seemed to be some spontaneous participation, as well. I couldn’t get to nearly all the acts that afternoon but I know I walked by some porches with musical offerings that were not on the official Grand Porch Party map. I heard some volunteer harmonies that listeners added to a porch musician’s rendition of a Crosby, Stills & Nash song. This event is a perfect example of how music draws people to it: create a public space for song and spoken word and folks flock to it like they are hungry for it.

A huge thanks to Tenille for having the imagination and initiative to stage such an event, and to the oh-so-hospitable hosts who welcomed the players and turned their private property over to neighbours and strangers alike for a short while. I hope this is only the inaugural event of an annual tradition. Maybe next year the music could be spread over several hours so that it would be possible to enjoy more of it. 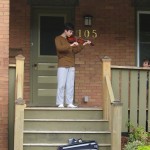 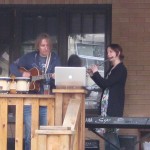