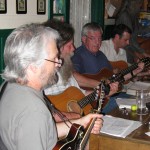 I didn’t get to visit a new open stage this week – creative energy was being directed to RIVERFOLK in Fergus.  Riverfolk is a showcase of local musical talent which has been held for the second year running along with Fergus’s Artwalk.  The rain moved many events inside or under tents but the creative spirit still shone.  I was lucky enough to participate in a set that celebrated the Fergus Tuesday night jam at Delainey’s:  Originals, traditionals and some songs just for the fun of it.  Hope that this live music festival gathers momentum in its third year next summer! 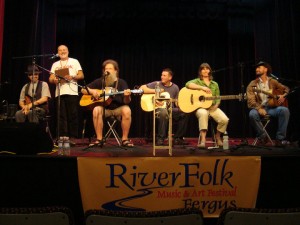