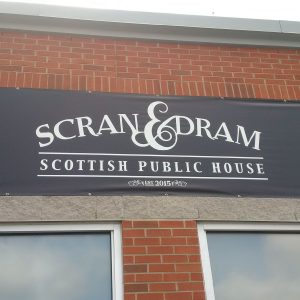 Here is a Celtic session (that allows the occasional non-Celtic song) with lots of experienced players but open to all levels. It is a lovely way to spend a Sunday afternoon.

Hosted by the talented and welcoming Bob McLean on the third Sunday of the month, the ceilidh is a pleasant country drive away from Kitchener at the Scran & Dram pub in New Hamburg. It is an acoustic circle and players take turns choosing & leading songs. Fiddles, guitars, whistles and drums all join in on well known tunes. Bring your favourite jig, reel or song to share – the next one is Sunday, August 19th. 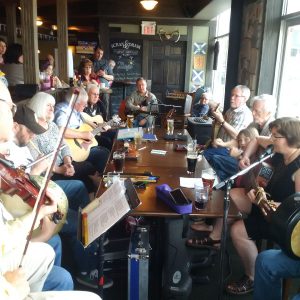 Last night I paid a visit to the weekly Celtic jam in Elora.  I remember visiting when it was still being held in the historic Dalby Housewhere it began in 2000.  Still hosted by Eva McAuley and Robin Aggus, the event has made a successful transition to its new home at the Shepherd’s Pub and boasts a variety of instruments, many of the musicians switching easily from one to another.  One thing I did remember from my last visit is that the players were very proficient and they played fast! So I kept my whistle buried in my bag thinking I’d

only bring it out if I felt I could join in – maybe on a slow number – but the minute I sat down, the fiddle player next to me said “you might as well get that flute out!”  I was startled enough (how did he know what I was hiding in my bag?) to admit that I was indeed carrying a whistle but I thought I’d wait to see if I played it or not.  I eventually brought it out for one tune, played with the assistance of some written music 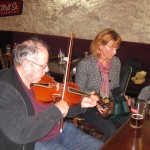 (which did not appear to be anywhere else in the room – all the tunes played from memory) and with the moral support of a couple of musicians joining me in the second go round.

So if you are looking for a place to share some traditional tunes, bring your fiddle, flute, whistle, pipes, concertina, guitar, bodhran, mandolin, harmonica (see a pattern? – use your imagination) to the Shepherd’s Pub on a Friday night.