It’s great to look back on a year of music when you know there’s more to look forward to . Since last June I have visited 25 events in 12 towns. It seems the more places I visit the more I hear about – for every gathering spot that has ended (sorry to hear of Alliston’s Groundswell Café closing its doors) several new initiatives spring up (for example, the Open Mic & Jam at the Ivy Arms, Milton and the Two Rivers Song Gathering, Guelph).

I appreciate the emails people have sent me with their own recommendations of a jam or open mic to check out. It’s great to get leads for new adventures and inspiring to hear about how much these places mean to people in their musical and personal journeys. Over 2700 of you dropped into the Open Stage Adventure last month and I hope to hear from more of you! 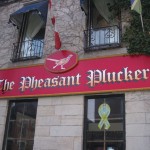 The Hamilton Folk Club – For longevity

The longest running open stage I visited this year has been going since 1982 (edged out the Free Times Café by one year). 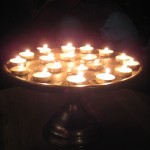 This venue stands out for having the most audience participation – so much so, that there wasn’t really a distinction between performers and audience. You’d be hard pressed to find someone in the establishment who wasn’t raising their voice, shaking a shaker or strumming an instrument.

Although I’m not a regular, the times I happened in on this event I was treated to songs by both up-and-coming and seasoned performers. I hear that one of the hosts, Christen Zuch, has started an open stage on Wednesday nights at the Embassy in Waterloo. I haven’t been there yet but it is definitely on the list for the next OSA season. 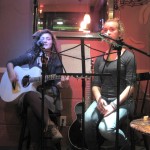 I was impressed with the songwriting and performing of the young people I saw at this venue (and it wasn’t just because two of them cheered when I took out my ukulele). 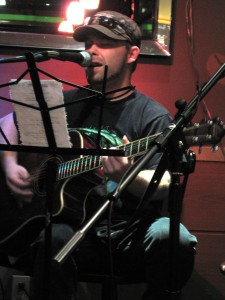 Less than 10 minutes away from the neon and kitsch of Niagara Falls tourist section you’ll find a place full of music and authentic folks. Last Friday I visited the Friday night open mic at the News Café. Vince made me feel welcome right away as I settled in with a hot bowl of soup and waited for the music to start. I don’t know what it is like from week to week, but once the music was in full swing the place was full. 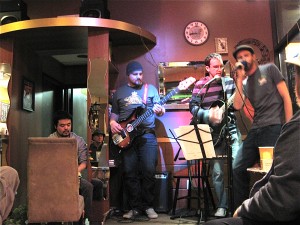 There was a great mix of styles and experience levels in attendance that night so no shortage of entertainment and yet no need to feel intimidated. The sign up board is propped up at the front door and since there is no MC to run the show performers are expected to keep track of who is on next – I have to say this is a little more challenging when you are not a local and don’t know people’s names (so you don’t know who you follow). But I managed to figure it out by counting down the list and counting the number of musicians before me. 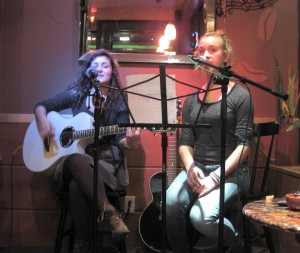 One advantage of this being an “all ages” venue (no alcohol served) was being able to hear musicians like Kikki and Gabbi – youth with talent! I really enjoyed their original songs and blended vocals. (here’s a youtube recording of an early morning, lakeside song: http://www.youtube.com/watch?v=LC8hw2ivyEs)

(Thanks to Jacobus for the CD – great to listen to on my long drive home.) 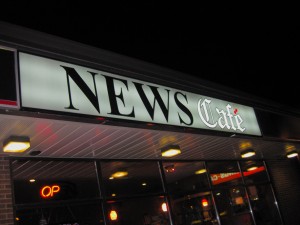