I love how one of my fellow song challengers, David Keeble, describes the musical mood swing: from “a real visit from the song fairy” to “Nice music – but it’s a mystery to me why I thought it was so great last night.” I’ve certainly had those moments.

Maybe this is one role of the co-write: the initial enthusiasm and seed of an idea is expressed and then – just as you start to doubt its value – the baton is passed to a co-writer to add their layer of creativity and keep the songwriting momentum going. I was starting to get discouraged by the collaboration piece (or lack thereof) – it’s hard to know how to navigate a virtual room of over 100 individuals and guess who would be a good musical match. I forged ahead, writing on my own and (very bravely, I thought) posted a rough draft of a song for Challenge #1. Well, that helped. Suddenly, I feel less invisible, I got great feedback, and maybe there’s a co-write in my not-so-distant future. I even took the song out for a spin at an open mic in Toronto this weekend.

As for the Week Two Challenge – Write a Top 40 Pop Song for Rob Wells: “Think Selena Gomez.  Think Demi Lovato.  Think big.  Think hits.”  These singers are so outside my usual listening and playing spheres that it took a good deal of effort to steer my imagination in that direction. I did some listening but found I didn’t relate to the messages or the musicality of these songs. I had to think of pop artists I enjoy for inspiration (Katy Perry, Pink) for inspiration. What can I pull from the genre that I could use in my own song? My conclusion: Simple chord structure, catchy chorus, and a melody that showcases the singer’s skills. Oh yes, and remember to have fun!

What better way to spend a snowy, slushy, Saturday afternoon

than in a cozy pub sharing music! Although it has been running for over half a dozen years, I had never heard of the open mic at Mackenzie’s, just across from High Park, until I saw the post on Open Mic Jamming.

There are several rotating hosts for this weekly open mic.  This is something I have noticed more and more – sharing the position of host. Musicians who have gigs or other competing obligations might find it hard to commit to a weekly event and this is a solution that allows the music to continue.  This week’s host was Michael Menegon who doubled as soundman – and also perfomer. Covers, originals and collaborations all came to the stage.

My companions on this adventure (thanks G, N & L) sampled the menu and gave it the stamp of approval: delicious hot chocolate, poutine, flatbread with goat cheese, as well as many offerings on tap.

Since there were no other ukuleles in evidence I made sure to play mine, declaring that no open mic was complete without a ukulele. I even got to debut a new song written for the SAC Songwriting Challenge so that was extra fun. 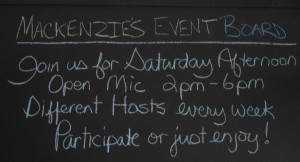 The first challenge – before even thinking about song structure, lyrics, or harmonies: picture who will be singing the song and create from there. Now – pitch a song to Matt Dusk. It certainly takes it from an exercise, a mere limbering up and flexing of our musical muscles, to something very real!

I tend to write songs that stem from personal experience or sentiments I just have to express, a sort of catharsis. When I took an on-line songwriting course presented by Pat Pattison I was introduced to techniques to help me create a song instead of just singing the ones that were bubbling out of me. It was a very interesting creative process that felt more like a game than therapy.

It is only the first week of the S.A.C. Song Challenge and I’m already being pulled from my well-worn patterns. First – I am writing a song for someone else’s voice, in someone else’s chosen style instead of my own. I tend to do subdued better than groove. But it feels good to stretch. Second – I am encouraged to collaborate, to co-write a song – with musicians I have never met! I have taken my first tentative steps forward by drafting a playful, jazzy song (lyrics & melody) and inviting instrumental and rhythmic input from others. I am excited to see how it will turn out – and also overwhelmed that in less than 4 days we will be into a new challenge demanding a new focus, a new feel, and another song.

For the next 6 weeks I’ll be using this space to blog about the S.A.C. Songwriting Challenge.  If you’d rather not read about my adventures in songwriting land just click on the Stages, Circles & Jams tab above and you’ll be taken to my usual open mic reviews.

Before even setting eyes on the first week’s assignment I have immersed myself in the S.A.C. Challenge by sampling all the musical clips posted by my fellow songwriters. I am struck by the age range (from a 12 year old songwriter to folks with 40+ years experience playing & writing music) and the many different musical styles represented.

The possibility of collaborating intrigues me but I’m not quite sure how it works at a distance: A sort of musical pen pal with notes and ideas flying back & forth? Or does one present a semi-finished project and ask for specific assistance (help with a bridge/harmonies/instrumental break)? 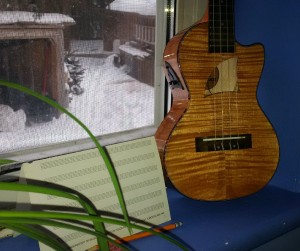 This will be an experiment in writing on demand as opposed to when a song comes to me. Looking forward to learning…