Venue: Sing Along with Sam & Jane

This weekend we checked out another kind of sing along – instead of being hosted in a private home, these sing alongs are held in Ashuré’s restaurant in Guelph. Sam Turton and Jane Lewis use their voices, a guitar and some occasional accordion to lead audience members in song.  Participation is encouraged by songbooks placed at tables along with slips of paper to make requests.  The songbooks cover a wide range of singable songs, from John Prine to the Beatles to U2.  Last night we had the pleasure of singing one of Sam’s originals and a “cameo” appearance of Trish Brubacher singing a Patsy Cline number.  With patrons scattered around the room, and Jane & Sam miked, there is less a feeling of singing as a group than singing along with Sam and Jane (which is, to be fair, the name of the event).  One solution:  bring a group to share a table and some harmonies.

The Guelph sing along has been going for three years and was a response people saying they wish they had a place to sing (other than the shower).  A year ago Jane & Sam started another sing along event in St. Catharines.

Sam & Jane’s website, All Together Now: Music for Everyone, has detailed information and resources on how good singing is for you.  To allow more people to reap the benefits of music, Jane & Sam host sing alongs in a variety of settings and promote workshops that help develop your inner musician (harmony singing, chord progressions, and a women’s choir are among the offerings). 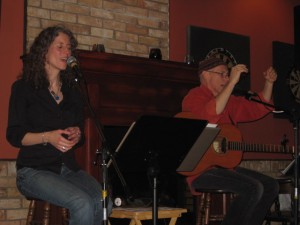 Not ready for microphones, stages and crowds?  This may be the place for you.  “The Sandbox” is intimate, not intimidating – all acoustic and very relaxed, held in the community room of the First Unitarian Congregation of Waterloo (which is actually in Kitchener).

We (fellow jamchasers Pete & Trish & myself) were particularly interested in catching up with the hosts: Ken Brown and Jay Moore.  Ken & Jay invite people to share songs, laughter – and a cup of tea.  This week there were 6 players and up to 5 listeners over the course of the evening, and plenty of stories and conversations interspersed with music.

If you come to listen, Ken’s voice, accompanied by his own bass or guitar will keep you mesmerized while Jay’s original songs are engaging.  You are welcome to bring your voice, instrument, covers and compositions.  Don’t be surprised if you find your music enhanced by warm harmonies and brilliant bass lines.

Friday night I had the opportunity to play a feature set with my friends Trish & Pete at the Elora Acoustic Café.  Although I have already posted twice about this venue I just want to thank the open mic musicians and all the friends who came out to support us.  What a warm room to sing our harmonies to!  And we appreciate everyone who added their voices and kazoos to our finale.

Once again the Elora Centre for the Arts provided a beautiful venue for an evening of music.  Thanks to Steve Royall for inviting us and Rob Morris for the balanced sound – so important for three part harmonies.  And to those who were visiting for the first time, I hope you enjoyed yourselves enough to come back for more.  Rumour has it that Kevin Breit will be playing the feature set on Friday, November 12th.  You won’t want to miss it.