Once again, Eaglewood Folk Festival provided a place to engage with live music in many ways. In addition to 2+ days of concerts and workshop stages (Susie Vinnick, The 24th Street Wailers, The Strumbellas, The Bombadils, Danny Michel, and Steve Poltz just a few of the inspiring artists who performed) there was a songwriting tent and two open stages. 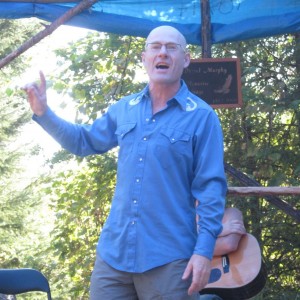 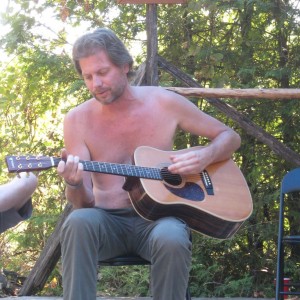 In the songwriting tent, I gleaned some good advice from Steve Poltz and Keith & Renee about the songwriting process. Knowing you are writing for, knowing yourself, discipline and banishing the spectre of writer’s block were just a few of the themes that performers and festival-goers explored.

The Saturday acoustic open stage was hosted by the oh-so-welcoming Shaman Ayerhart. It was such a popular event that there was only time for one song each and it still went half an hour over time. There were familiar faces from other years (including Shaman’s parents) as well as some lovely surprises. I wish I knew who the spoken word performer was – he only went by the handle “IF” – he blew our socks off with his poetry and presence. A second opportunity to play the little stage in the woods was offered on Sunday afternoon. 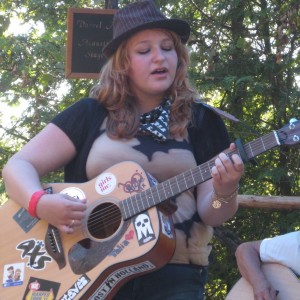 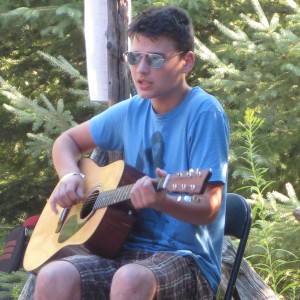 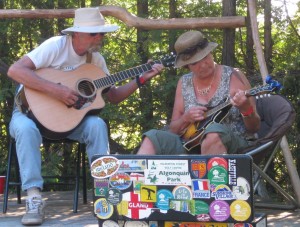 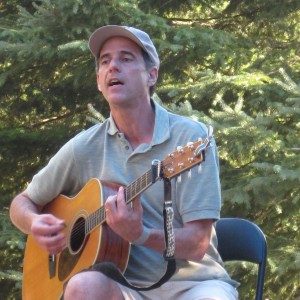 The icing on the cake for an already full and fulfilling Saturday was the late night campfire. Hours slipped by like minutes as we went around and around, sharing old favourites, originals, accompanied by the occasional train passing through (often at very fitting moments). It was hard to pull ourselves away from such great company and music, but the promise of one more day of music at Eaglewood was the incentive to get a few hours of sleep. As we wove our way back through the dark paths we heard strains of music playing, saw glimpses of other fires through the trees.

Thanks, Eaglewood, for weaving some musical magic. 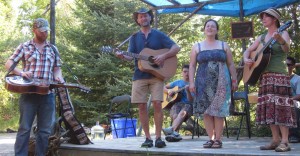 Callisto with Shaman Ayerhart on the dobro

For me, Canadian summers will always be linked to campfires: in the backyard, by the lake, at Centre Island. Our township has announced a fire ban due to the lack of rain and resulting crispy dryness of the grasses and trees around us. But I’d like us to keep the summer campfire idea alive by sharing our favourite campfire songs. Post a comment below with a silly song, a soulful one, or maybe that one  that always gets everybody singing along. 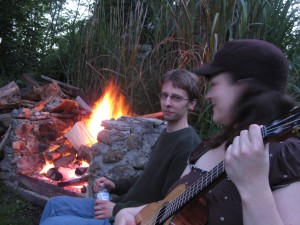 Nothing like a campfire singalong to chase away the winter blahs. This particular campfire consists of a tray full of candles in the middle of a café in

downtown Guelph. As the name suggests, the songs are mostly of the 2 & 3 chord variety, well known lyrics or a chorus that everyone can join in on – and plenty of CanCon (Neil Young & Stan Rogers alongside Dan Mangan & Rheostatics) This event seems to attract more than your average musicians and boasts a good range of instruments – banjo, mandolin, ukulele, trumpet all joined the ever present guitar choir.

This is the 6th year of the Campfire Sessions. Hosts Greg and Mark set the relaxed, friendly tone. Players included visitors from Nova Scotia and a lovely cameo from two of the café’s staff. This appears to be a well loved local event – the place was packed and everyone was there for the music. 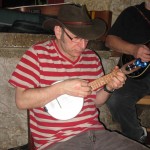 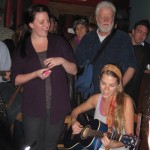 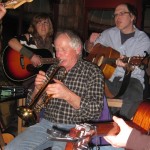 Not a sleepy summer campfire, this is a high energy acoustic jam. Be prepared to really belt it out to be heard over the enthusiastic accompaniment – or sing a song the guitar players don’t know : )

Once again, Eaglewood Folk Festival in Pefferlaw, Ontario scheduled a one hour slot each day for festival listeners to become festival performers. This year’s open stage was hosted by Shaman Ayerhart and included mostly original tunes with a little Neil Young thrown in for good measure.

In addition to the open stage, Eaglewood boasts a fine tradition of musical campfires that get going as the last performance winds down and carry on through the night, some stalwart singers still going as the sun comes up. There are several to choose from so some musicians make their plans to meet up with friends later on while others just follow the sound through the trees until they arrive at the source. I think I hit the jackpot this year: mandolin, trumpet, guitars, harmonies, exquisite songs – as well as a roaring fire and good company. Thanks to all of you!