The Christmas carol sing is a long standing song circle tradition: everyone expected to join in (even if you only know chorus and some of the words to the first verse), inside, outdoors, meticulously planned or spontaneous outburst, accompanied by an organ, school band or a cappella, often with the promise of sweets and warming libations afterwards.  The Elora Festival Singers performed their annual Festival of Carols which combines performance pieces with audience participation numbers.  The small venue (St. John’s Anglican Church), wonderful acoustics, and exquisite voices made me feel as though I was hovering just over my seat, somewhere in the air where the voices mingled then poured over our ears.  Unbelievable experience!

What was your favourite seasonal song this year?  A traditional carol with a new twist?  A modern Christmas ballad?

To end the year off here is a sweet Christmas song for you:

Whatever your religious or spiritual persuasion I hope you took the opportunity to raise your voice in song or otherwise delighted by aural pleasure.  Looking forward to more musical adventures in 2011!

I visited the Corktown Ukulele Jam at the urging of uke playing musical friends.  Although the event is just approaching its 2nd anniversary it has a devoted following that results in 60-70 uke players coming together every Wednesday night at the Dominion on Queen.

The evening starts with a one hour workshop, led by Steve McNie, co-founder of the Corktown Uke Jam.  Steve is an intense taskmaster and does not tolerate any chatting or “noodling” while he is leading the group through the strumming patterns and chord changes of a new song.  He reminded me of a strict high school teacher who had had a bit too much coffee and not enough sleep the night before.  But the room of ukulele devotees takes the scolding in stride – the overall ambiance is friendly and laid back, lots of regulars but newcomers are welcome. 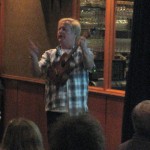 There is a break for people to order food, drinks and socialize (desperately needed after being on our best behaviour for Steve!).  Next is an open mic – for which you are encouraged to sign up ahead of time on-line (http://www.torontoukes.com/).  This part of the evening is usually hosted by David Newland, the other co-founder of the Corktown Uke Jam.  Other instruments may make an appearance in a supportive role (there is a regular stand up bass player and Steve provided Edith Piaf accents with his accordion) but the uke takes centre stage.  After a few performances, the evening continues with selections from the Jambook: words and chords projected on the screen, a volunteer to lead, and a room full of ukuleles and voices brings it to life. 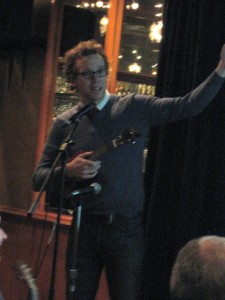 One regular attendee is Heather Katz, owner of Broadway Music in Orangeville.  She’ll often arrive with uke accessories, music books, and could even bring along a uke for you to try if you get in touch ahead of time.  This week she gave us a beautiful performance of “Imagine” to honour the 30th anniversary of John Lennon’s death.

Come early to get a seat as the place often fills up – besides, that will give you time to eat supper there, and the food is good.  I’ll leave you with the benediction said by all participants at the end of the evening, ukes held over their hearts:

On earth we strive for earthly things

In heaven, choirs of angels sing

While we play ukulele.